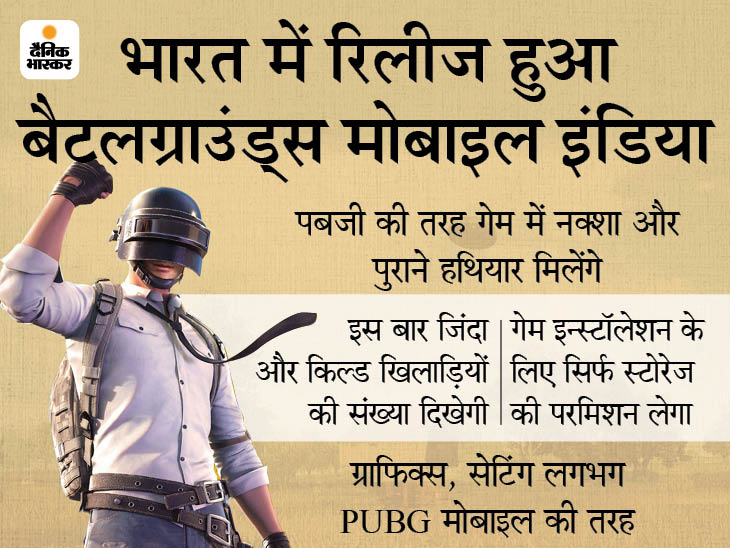 South Korean video game developer Crafton has finally released the Battlegrounds Mobile India game in India. This game was downloaded by beta users from Google Play Store. However, the company has now removed it from the beta version as well. That is, only a few users were able to download this game. Now on downloading, users are getting the message of ‘Internal server error’.

Crafton says that soon it will be released to all users. The company has also released its teaser on its Facebook page. Earlier there were reports that the game could be released on June 18.

What will be different in the new pubg?

What worries users the most is whether they will be able to access PUBG Mobile’s data in Battlegrounds Mobile India. The good news for them is that they can do it. Actually, Battlegrounds Mobile India has given users an option for this. With its help the data can be accessed. Users will get time till December for this. After the data transfer, you will be able to play this game from where you left in PUBG Mobile.

How much space will the game take on the phone?
The game captured 6.06GB of storage when Battlegrounds Mobile India was installed on the OnePlus 7 Pro. This is the 1.4.0 version of the game. The special thing is that after the game is installed, only the permissions related to your storage have been asked. No other permissions like camera, gallery, contacts, music, video were taken. If you use in-game chat, it will ask you to allow microphone.

For those who have played PUBG India game, there is nothing new in the setting. It’s just like the old game. From the home screen to the entire gameplay, it feels like playing PUBG Mobile. A warning is given before the game starts. It is said in this that this is not a real world based game. You have to survive in the virtual game.

The game will run even on a phone with 2GB RAM
Crafton said that all smartphone users who have Android 5.1.1 Lollipop or above operating system will be able to play this game easily. To play the game, the phone must have at least 2GB of RAM. That is, whose phone’s configuration is not very high, they will also be able to enjoy this game.

Data security first priority
Prioritizing privacy and data security, Crafton will work with its partners to ensure the security of data at every stage. This will ensure that privacy rights are respected and that all data collection and storage will be carried out in compliance with all laws applicable to players in India.