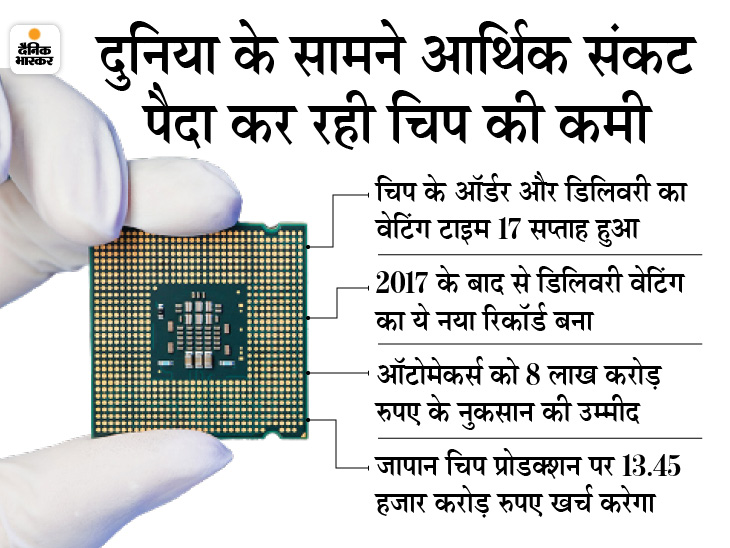 Fed up with Ads? Install Dainik Bhaskar App for news without ads

Production from computer to car has stopped due to chip. Or its speed has slowed down. Simply put, the automobile industry to electronics companies are struggling with chip shortages. Chip shortages can also be seen as a new threat. The economy has also collapsed due to sluggish production in this period of epidemic.

According to research by Susquehanna Financial Group, the time period for chip orders and delivery in April has risen to 17 weeks (about 4 months). This is also the new record of chip waiting since 2017 when it tracked its data.

Automakers expect a loss of 8 lakh crores
Shipping of products such as cars, gaming consoles and refrigerators has also been stopped due to chip shortages. At the same time, Ford Motor and General Motor Company had to close their plants due to lack of necessary components. Due to this, the automakers are expecting a loss of $ 110 billion (about 8 lakh crore rupees) in sales this year. Employment is decreasing due to the closure of the plant. At the same time, the threat to the future is also increasing due to the economic loss.

Epidemic worsens Taiwan’s condition
The major production of the chip is being done in Taiwan. This is why most companies in the world depend on Taiwan. Chip production has become difficult due to the re-emergence of Kovid-19 cases. Schools and colleges are closed inside the country. At the same time, museums and public facilities have also been closed along with social activity. However, businesses and factories have been operationalized. The government may consider a wider ban due to increasing cases of coronaviruses.

Japan will boost local chip production
According to the Nikkei newspaper, Japan plans to increase the expenditure to increase local semiconductor and battery production this year. It said that under the draft growth blueprint to be prepared in early June, the government will encourage large-scale investment to develop batteries for electric vehicles. According to reports, the government will spend 200 billion yen (about 13.45 thousand crores) to promote the local chipmaking industry and production of semiconductor.

India is also wooing chip maker companies
To meet the shortage of semiconductor, the government of the country also wants to bring chip making companies here. It has made cash offers of more than 1 billion dollars (about 7300 crores rupees) to every company that makes semiconductors. With the help of this amount, she wants to set up manufacturing units in the country. So that the supply chain of the smartphone assembly industry can be strengthened. This is also the right time for chip companies to be established in the country.

What is semiconductor?
These are usually silicon chips. They are used in many products such as computers, cell phones, gadgets, vehicles and even microwave ovens. They operate the control and memory function of a product.

According to a report by the MarketsandMarkets website, the semiconductor industry grew at a rate of 5.8% annually between 2016 and 2022. It is expected that by 2022, the automotive semiconductor market will be worth $ 48.78 billion, or about 3.56 lakh crore rupees.