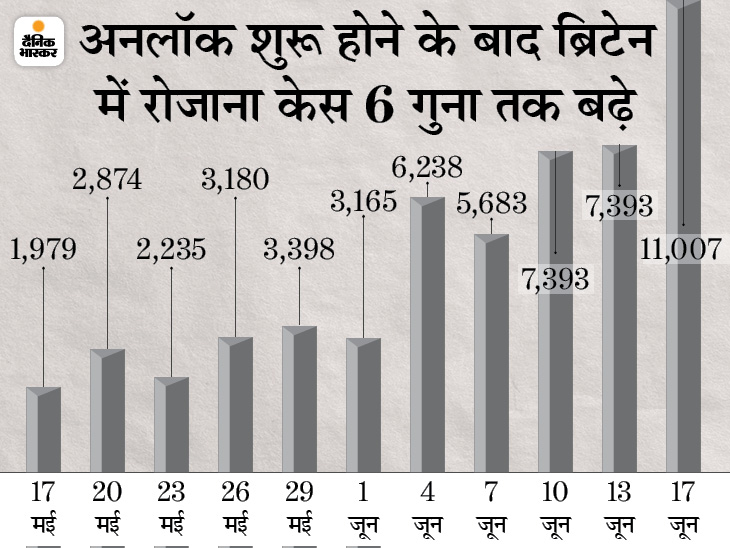 The third wave of Corona has knocked in Britain. Corona was confirmed in 11,007 people here on Thursday. This is the largest number of cases coming in a day in the last 4 months. Earlier on February 18, 11,994 cases were found. Corona cases have increased in Britain when a full month has passed since the country was unlocked.

Delta variant raises concern in England
On the other hand, studies on the delta variant in England have raised concerns. According to this, due to this variant, the number of infected in Britain has doubled in just 11 days. This report, which came on Thursday, has been prepared by Imperial College London. Under this, swab test was taken from one lakh houses from 20 May to 7 June. In this, this deadly virus was found in 15% of the people.

Cornwall: 10% increase in cases after G-7 summit
After the three-day G-7 summit held last week in Cornwall, England, cases of corona have started increasing there. Up to 10% of new cases have been found in Cornwall in a week. The Chief Executive Officer of Cornwall said that the hotels had to be closed due to the increasing cases of Corona. At the same time, the reasons for the increase in cases in Cornwall after the end of the G-7 have raised concerns, because during the conference the leaders appeared several times without masks. Also, there was no social distancing between them.

Indonesia: 300 doctors who got Chinese vaccine infected
In Indonesia, more than 300 such doctors were hit by the epidemic, who had received a dose of the corona vaccine. He was given a dose of the Chinese vaccine Sinovac. Most doctors are asymptomatic. There are also some doctors whose oxygen level is very low. Due to the delta variant in Indonesia, more than 10 thousand cases have been received after 4 months on Wednesday. Here 90% of the hospitals are filled.

3.85 lakh cases came in the world on the last day
In the last 24 hours, 3.85 lakh infected people have been identified in the world. During this, 8,648 people also died due to corona. It was a matter of relief that during this period 3.92 lakh people were also cured of corona. Most cases were reported in Brazil. The corona report of 74,327 people came positive here on Thursday and the highest number of 2,335 deaths were also reported.

Top-10 countries, where so far most people have been infected

(These figures are according to www.worldometers.info/coronavirus/)