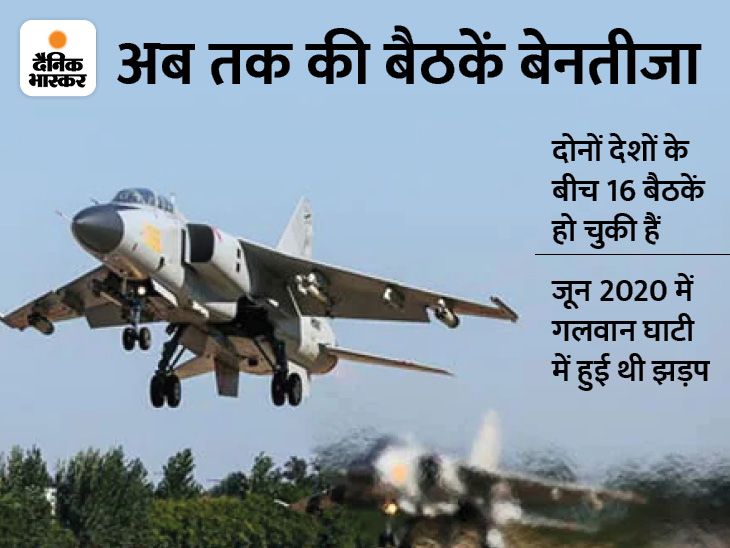 Military commander level meeting was held between India and China on Friday.

Tension has been going on between India-China border for a long time. Meanwhile, there are reports that China is training its army to compete with the Indian Army in Aksai Chin. India has objected to this in the meeting of the military commander. On Friday, there was a discussion again in Ladakh to end the border tension between the two countries. During this, there was a discussion especially regarding the airspace violation. Along with this, both the countries have also emphasized on keeping the marking of their areas clear.

So far, several rounds of meetings have been held between the two countries, but no solution could be found on this issue. The 16th round of meeting between the two countries was held last month, a day after the 13-hour meeting, both sides issued a joint statement. It was said that this meeting would prove helpful in restoring peace and stability along the Line of Actual Control (LAC) in eastern Ladakh. At the same time, the relationship between both the parties will also improve.

China has done teasing acts on the border
Recently, Indian Army officials said that China is doing provocative acts along the Line of Actual Control (LAC) in eastern Ladakh. He is practicing here. He passed an aircraft close to our army. When the Air Force was activated, the aircraft fled. This incident happened at the end of June. India had expressed strong objection to China regarding this incident. Along with this, he was also instructed not to do this in future. Seeing the antics of China, India had also activated its missiles.

The border between India and China in Ladakh is divided into three sectors. (Map is symbolic.)

Violent clashes took place in Galwan on the night of 15 June 2020
On this day there was pressure on our ground troops in Galwan. There was pressure on China too. The Chinese army was sitting on that site, so the Indian army asked them to return. Although they agreed, but the dispute started with Chinese action. China set up two tents, which were like observation posts. Chinese soldiers argued that if we go back then we will not be able to keep an eye on your activities.

The Indian Army protested against this and the skirmish started. Chinese soldiers were armed with weapons and the Indian Army had reached there under old practice. After this clash, talks took place between the two sides around 30 June and China withdrew one kilometer from there. India was back on its post.