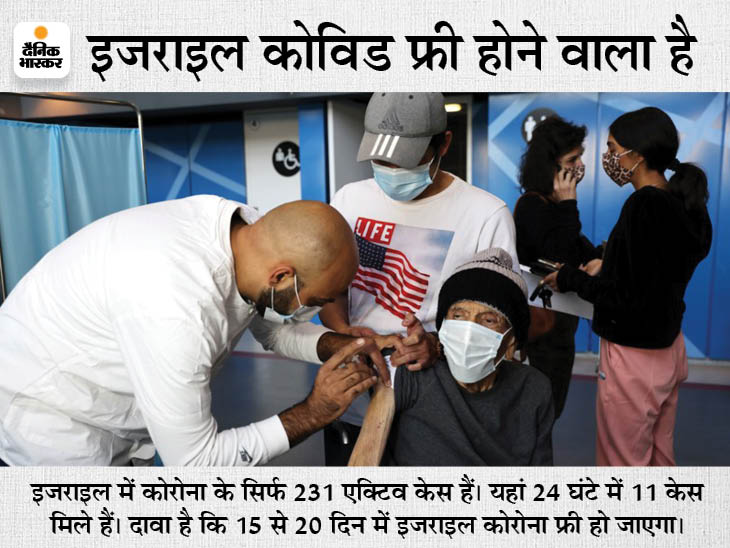 Israel has become the first country in the world during the Corona era, where there will no longer be a need to apply masks even in indoor (closed places). The Health Ministry gave exemption from this restriction from Tuesday. The ministry said that this decision has been taken in view of the decreasing number of corona patients. In Israel, the exemption of masks has already been given in the outdoors.

Now only employees who do not apply corona vaccine and workers working in old age homes will be required to apply masks. Also, it will be mandatory to wear a mask while traveling by plane and during quarantine. Apart from this, those who are admitted in hospitals or nursing homes will also be required to wear masks.

At present, the Israel Health Ministry has not issued any instructions for schools. Amidst the political upheaval, the corona vaccination campaign of 12 to 15-year-old children is going on in the country since last week. So far, about 6 lakh children have been vaccinated against corona.

3 lakh cases in 24 hours in the world; This figure is the lowest in 85 days
On Monday, the corona report of 3 lakh 347 people worldwide came positive. During this, 6,672 people died due to infection. This death toll is the lowest in the last 85 days. Earlier on March 21, 6,298 people died. So far more than 17.70 crore people have been infected with corona in the world. 38.27 lakh people have died.

231 active cases of corona in a country with a population of 92 lakhs
Israel, with a population of 9.2 million, has so far vaccinated 85% of its adults. Israel is also the first country to do so. On the other hand, at present there are only 231 active cases of corona in Israel. 24 cases have been found here in 24 hours. It is claimed that Israel will become corona free in the next 15 to 20 days. It is mandatory for the tourists coming here to get tested.