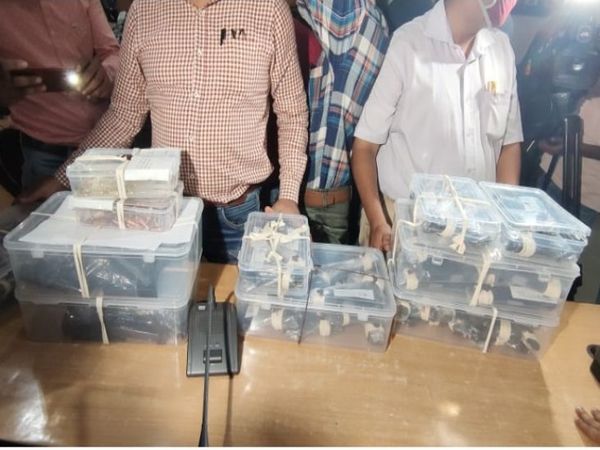 A cache of weapons recovered from a Batala youth working for a terrorist organization in Katthanangal, Amritsar.

The accused, caught with a large quantity of foreign pistols in Amritsar, have made shocking revelations. According to security agencies, this accused has told that Jammu and Kashmir was to be shaken through the consignment of weapons sent. This conspiracy was hatched by the Khalistan Liberation Force (KLF) and Babbar Khalsa International (BKI) operating from neighboring Pakistan.

Jagjit Singh alias Jaggu of Batala was caught 4 days ago

Let us tell you that on Friday, June 11, a person was arrested by the Intelligence Branch of the police in Amritsar on the charge of trading in illegal arms. A person named Jagjit Singh alias Jaggu, a resident of Pulia Kalan, Batala, together got 48 foreign pistols, 99 magazines and two hundred rounds of weapons. During the interrogation, the security agencies have got many important clues. According to Jagjit, the terrorist organization KLF and BKI, operating from Pakistan, had sent this consignment to carry out terrorist incidents in Jammu and Kashmir. Jagjit Singh was about to take it to Jammu and Kashmir by road along with his companions, but was already arrested.

4 years ago, there was a meeting with the handler of the terrorist organization in America

So far, it has come to the fore in the investigation that Jagjit had a meeting with Damanjot Singh alias Darman Kahlon sitting in America four years ago. After this Kahlon associated him with the Khalistan Movement. Jagjit has admitted in police custody that Kahlon has given him a task to pair 15 youths with no criminal records of his kind, so that he can carry out his activities in Punjab.

Now the police and Border Security Force (BSF) officials are trying to find out in which farmer’s field this cache of weapons was kept by Pakistan’s intelligence agency ISI. The police have also questioned Jagjit’s PSPCL employee father Paramjit Singh. Along with this, Jagjit’s close friends have also been rounded up. The State Special Operations Cell is also investigating his Dubai and Pakistan connections. However, the police are yet to trace even the two accused, who had reached Kathunangal near Jagjit with a consignment of weapons from the border. On the other hand, an officer probing the matter said that the police team has conducted raids in Jammu and Kashmir. There will be more arrests from the Border Belt in the coming days.