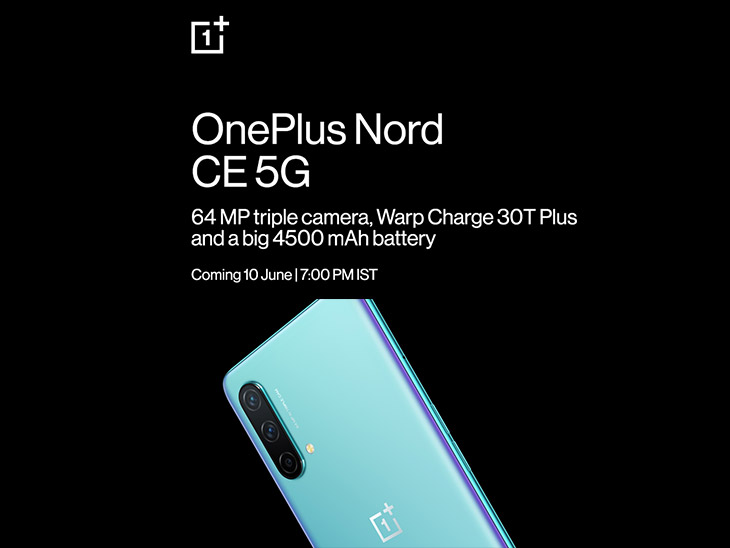 June 10 is going to prove to be a big day for OnePlus, as the company is going to launch its OnePlus Nord CE 5G smartphone. It will be broadcast live through a virtual event which you can watch on the YouTube channel of One Plus. It is believed that this phone has been completely endowed with new technology. Its design looks very attractive. It will first be made available in the European and Indian markets. Just before the launch, the company has revealed the design of the rear panel of the phone, which makes its design clues understandable. It has a vertical triple rear camera setup and 4500mAh battery, this information is also available in the teaser.

A closer look at this picture shows that a vertical triple camera setup has been given in the blue colored OnePlus Nord CE 5G. The second teaser of the company has revealed that the punch-hole will be found in the top left corner of the screen. It is clear from its poster that this phone will have a 4500mAh battery. This battery supports 30 T PLUS Charge technology. Talking about other features, according to what has come out from the teaser, it will get 64 megapixel primary camera and 3.5 mm audio jack.

Apart from this, many different things will be found in this handset which the youth may like. Talking about the price, it is expected that in this case it is going to be very competitive compared to other handsets. Wait a bit for more details or else watch this teaser follow the link.

OnePlus has also teased its TV U1S. It will come with a ‘bezelless’ design and 4K resolution. The TV will get Dynaudio sound, which has 30 W speakers and HDMI 2.0 port. This TV will work on Android TV 10. Regarding the OnePlus TV U1S, it has been said that it will come with screen sizes of 50 inches, 55 inches and 65 inches. HDR10+, HLG and MEMC can also be found in this. A remote with NFC support can be found in OnePlus TV. Google Assistant can be found for voice commands in this smart TV, which can work even without a remote.