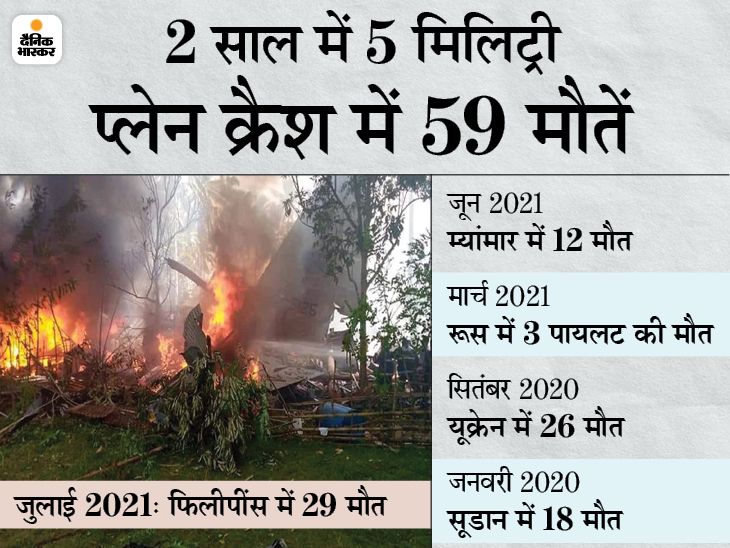 A major plane crash happened in the Philippines on Sunday. An Air Force C-130 aircraft carrying military forces crashed here, killing 29 people. 17 are still missing. There were 85 people on board the plane, including 3 drivers and 5 crew members.

The reason for the plane crash is not yet clear. In two years there have been 4 major accidents like Philippines Military Aircraft Crash. In these 59 people lost their lives. Know, about these 4 accidents …

1. Myanmar: 12 killed in military plane crash
A major military plane crash happened in Myanmar last June 2021. 12 people died in this accident on 10 June. There were 6 crew members and 8 passengers on board the plane. It was told that the accident took place due to bad weather. Contact with the plane was lost when it was taking off at an altitude of 400 meters from the steel factory located near the airport. The fragments of the plane can be seen in the pictures that came out after the accident.

2. Russia: 3 pilots killed in military plane crash
In March 2021, three pilots were killed in a military plane crash in Russia. The Russian Defense Ministry had said that the accident occurred due to a defect in the ejection seats of the Tu-22 strategic bomber. “During planned ground preparations for a Tu-22M3 flight over the airspace of the Kaluga region, a malfunction occurred in the ejection system,” the Defense Ministry said. Due to ‘inadequate altitude’ to deploy the parachute, 3 crew members suffered serious injuries, succumbing to their injuries.

3. Ukraine: 26 killed in military plane crash
There was a major military crash in Ukraine in September 2020. 26 people died in this accident on 26 September. There were 20 young cadets and 7 crew members on board the aircraft. Ukrainian President Vladimir Zelensky visited the scene after the accident. The Antonov-26 transport plane crashed at 8:50 pm local time (17:50 GMT), two kilometers (1 mi) from Chuhiv Military Airport. The plane caught fire after the accident. It took an hour to get the fire under control.

4. Sudan: 18 killed including children in military transport plane crash
In January 2020, a military transport plane crash in Sudan killed 18 people, including four children. The plane crashed five minutes after taking off from an airport in El-Jinina, the capital of western Darfur province, which was engaged in aid work in the area. There are frequent clashes between tribal groups here. Army spokesman Amer Mohamed al-Hasan said an Antonov-12 military plane crashed Thursday night after taking off from El Jinina, killing 18 people, including seven of its crew members, three judges and four children.

Accused arrested for demanding extortion of 25 lakhs from agent in Panipat | Two brothers had hatched a conspiracy for sister’s marriage, police...