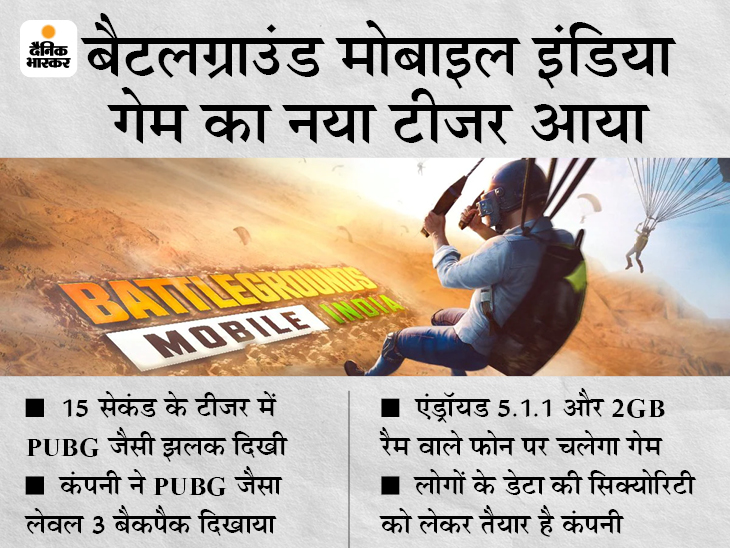 South Korean video game developer Crafton has released a new teaser regarding the Battlegrounds Mobile India game. This 15-second teaser released on social media is showing a bagpack like PubG Mobile. Did this teaser be pre-registered? Has been named. The company has not announced its launch yet, but is making it fun before launching.

Crafton began pre-registration of the game on 18 May, but how many people have registered for it, the figure has not yet been released. This is a new version of Pabji. This multiplayer free mobile game developed by Crafton.

Like backpack found in level 3 of PUBG
PUBG Mobile was a multiplayer action game. In it, players were able to keep the necessary items (gun, bullets, first-aid kit and injection) through the bagpack. This kind of facility is going to be available in the new game as well. The bagpack seen in the teaser is level 3. It is the largest capacity bag. Level-1 and Level-2 bagpacks carry less luggage.

The game will run on 2GB RAM phones
Kraft has also told that this game will be able to easily play all those smartphone users who have Android 5.1.1 Lollipop or later operating system. To play the game, it is necessary to have at least 2GB of RAM in the phone. That is, the phones whose configuration is not very high, they will also be able to enjoy this game.

Data security first priority
Crafton will work with its partners to ensure data security at every stage, prioritizing privacy and data security. This will ensure that privacy rights are respected and complete collection and storage of data will be done by following all the laws applicable to players in India.

Army will get a fight
This Vetal game will give a direct competition to the Indian Vetal game military. FAU-G (Fearless and United Guards) is a first-person shooter game for mobile. The game is made by Bangalore-based company nCore Games. Actor Akshay Kumar announced the launch of the Made-in-India FAU-G game after Pabji was banned. The FAU-G is designed under the “Self-reliant India” mission. 20 per cent of the game proceeds will be donated to the Veer Trust of India.