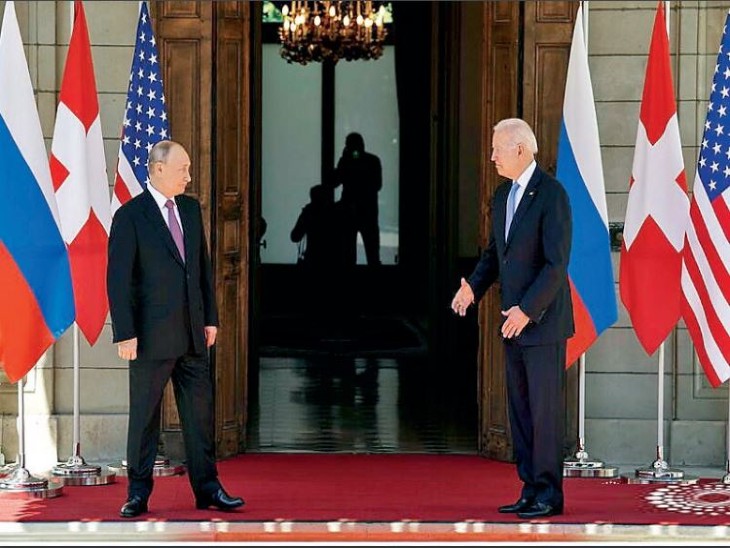 Putin said – gave information on cyber attacks, but did not get the answer.

The meeting between US President Joe Biden and Russian President Vladimir Putin took place in Geneva on Wednesday, which lasted for four hours. US Secretary of State Antony Blinken and Russian Foreign Minister Sergei Lavrov were also present in the meeting. Before the talks, both the leaders described each other as a superpower. However, Biden did not speak to the media after the meeting. They left by showing their hands to the media. He later said that this conversation is not about mutual trust. Rather, it is a matter of their own interest. For now I trust. Let’s see what happens next.

I told them we have significant cyber capability and they know it. If, they violate these basic norms, we will respond. Biden said that cases of human rights violations cannot be ignored. On the other hand, after the talks, Putin spoke to the media.

“We do not believe that there is any enmity between the two countries. Both the countries have agreed to bring back the diplomats who have been expelled from their respective countries. Putin said, ‘Russia has given detailed information to America on the issue of cyber attacks. But the US has not responded to this.

Both the countries have agreed to talk on cyber security. Putin described Biden as a seasoned politician. “Biden is very different from former US President Donald Trump,” he said. Putin was asked about his imprisoned rival, Alexei Navelny. To this Putin said that there was no fair reporting of the incident. Putin also said that the two sides have discussed Ukraine’s return to the NATO alliance.

A journalist asked Biden if he had warned President Putin of military action over the recent ransomware attack. On this, the US President said – No, there was no talk between us regarding military action. Biden said responsible countries need to take action against criminals operating ransomware activities in their region.

No room for new cold war, gap in our generation

On a question related to cyber attacks, Biden said that I do not think he is preparing for a cold war with America. As I told them your generation and my generation are almost 10 years apart. But it is clear that this is not in anyone’s interest. Biden said he was confident Putin would repeat the ‘let’s hug and walk together’ era of the 60s. Relationships will run on mutual relations only.