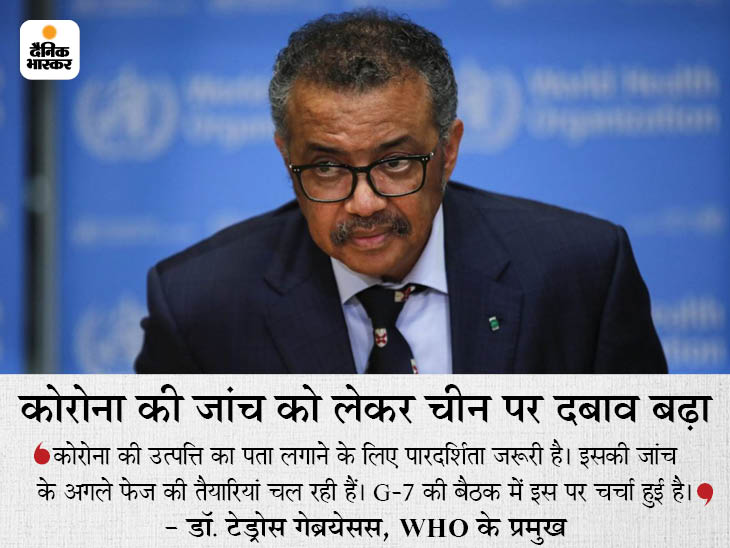 World Health Organization (WHO) chief Dr. Tedros Ghebreyesus has asked China to cooperate in the ongoing investigation regarding the origin of Corona. His statement came after attending the Group of-7 (G-7) summit going on in Britain on Saturday.

The WHO chief has said that more transparency will be maintained in the next phase of the investigation. He said that we need the cooperation of China to complete the investigation. Referring to the previous investigation report, Tedros said that it was difficult to share the data after the release of that report. Especially the data, which was in raw form.

According to the American media Wall Street General, Dr. Tedros said that on Saturday the leaders of the G-7 countries have insisted on advancing the investigation at the summit. We are preparing to take it to the next stage.

US got Britain’s support
In the last few days, America, Britain and Australia have demanded the WHO to proceed with the investigation soon. On Thursday, after meeting US President Joe Biden, British PM Boris Johnson raised the issue of the ongoing investigation on Corona. He had said in the joint statement that we also want timely, transparent investigation based on evidence. China should also be included in this investigation.

Anthony Fossey has also expressed doubts
America is progressing rapidly in the investigation of the corona virus. Earlier, the Chief of the Corona Virus Task Force and US infectious disease expert Dr. Anthony Fauci had demanded the World Health Organization (WHO) to proceed with the investigation regarding the origin of the corona. He said that no theory can be rejected in this case. Earlier, an Australian government minister had also made a similar statement.

Australian expert claims, Corona is China’s biological weapon
A few days ago ‘Weekend Australia’ also quoted an expert as saying that China has been trying to make biological weapons since 2015 and its military is also involved in it. This expert had expressed suspicion that this virus was accidentally leaked during research in the lab. After this, the American newspaper ‘Wall Street Journal’ said in a report on Monday – China’s theory of the virus is doubtful, because in November 2019 itself, three scientists of Wuhan lab were found with its symptoms and they Was admitted to the hospital.

WHO’s troubles will increase again
When Donald Trump was president, he had publicly said many times that the corona virus should be called the Chinese virus, because it originated from China and China spread it. Trump had even claimed that American investigative agencies have evidence for this and when the time comes, they will be placed before the world. However, Trump lost the election and things went cold. Now Biden’s tough stand has again increased the problems of China and WHO.

China should not interfere
According to the ‘New York Times’, White House officials had made it clear from the beginning that the WHO would have to conduct a fresh and clean investigation. The White House also said that China should be kept away from this investigation. Now if WHO does not do this, then America can become a problem for it. US Health Secretary Xavier Bereca and his team suspect that the corona virus leaked due to a lab accident. In this case some evidence is also told to him. Bereka even said that China’s arch enemy Taiwan should be made the observer of this investigation, although it is not a member of the WHO.