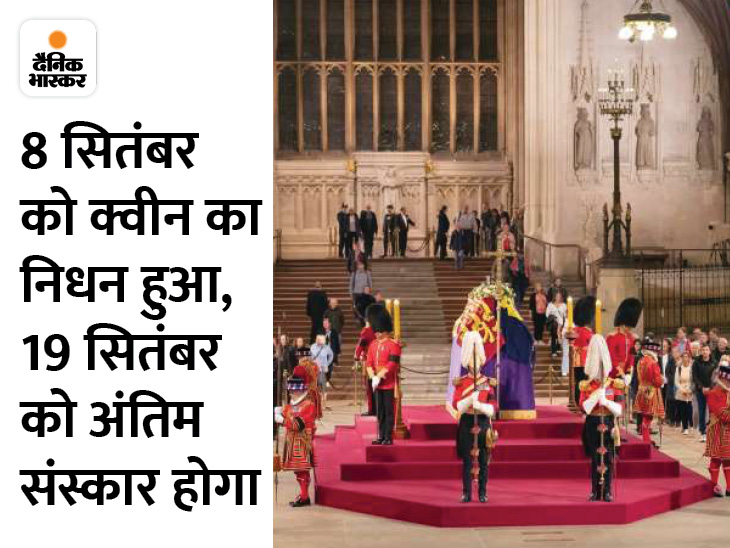 China imposed a ban
Some UK lawmakers had expressed concern over the invitation to the Chinese delegation. China has banned several British lawmakers for criticizing human rights violations in the Xinjiang region. In March 2021, Britain imposed sanctions on Chinese officials for human rights abuses in Xinjiang, China. After this, China banned nine UK MPs and four organisations. Because of this, in September 2021, the Chinese ambassador was prevented from appearing in Parliament.

No invitation to Russia
The King and Queen of Belgium, Sweden, the Netherlands and Spain will attend the funeral, including US President Joe Biden. Heads of countries like France, Brazil, New Zealand, Sri Lanka, Turkey etc. will also reach there. Belarus, Myanmar, Iran including Russian President Vladimir Putin have not been invited.

Ministry of External Affairs gives approval
Spokesperson of UK PM Liz Truss says that the guest list is made only on the approval of the Ministry of Foreign Affairs. According to tradition, guests are invited from countries that have good diplomatic relations with Britain.

China said going on the invitation of Britain
China’s Foreign Ministry spokesperson Mao Ning said the Queen’s funeral is an important event for Britain. Our delegation to the UK invitation is going to honor the Queen and her relationship with the UK. The UK as a host must follow protocol along with the guests. According to a British Foreign Office source, Chinese Vice President Wang Qishan will represent China.

Must read these news related to Queen.

US President will attend, Jinping and Putin will not come

The coffin of Britain’s Queen Elizabeth II was moved from Buckingham Palace to Westminster Hall on Wednesday. Here his last darshan can be done. The coffin was accompanied by his sons Emperor Charles III, Prince William and Harry. The funeral will take place on Monday with state honors. President Draupadi Murmu from India will attend it. According to media reports, around 500 heads of state will attend the Queen’s funeral. Queen and King of some countries may also come to attend the funeral. Read full news…

The President will be in Britain from 17 to 19 September, the first foreign trip after taking office

President Draupadi Murmu will visit Britain on 17 September. She will attend Queen Elizabeth’s funeral. According to the Ministry of External Affairs, Murmu will be visiting Britain from 17 to 19 September. This will be Murmu’s first foreign visit after becoming the President. Read full news…

A large number of people reached Westminster Hall to pay their last respects, there was a long line up to 5 KM

The coffin of Queen Elizabeth II arrived in London on Tuesday night. London’s Westminster Hall will open to the public on Wednesday for the last viewing of the Queen’s coffin. However, people have already reached there. Earlier, thousands of people paid their last respects to the Queen at St Giles’ Cathedral in Edinburgh, Scotland. Read full news…

indoree - September 9, 2021 0
Washington. US Secretary of State Antony Blinken has given an announcement relating to relations with the Taliban. He stated, 'We can not...

rakhi sawant says she will be never dignosed with corona, tells the reason |...

indoree - December 19, 2021 0
New Delhi. Fee firm MobiKwik has not too long ago launched a pay as you go card MobiKwik RuPay Card. The corporate has...

indoree - August 22, 2022 0
13 hours agoA small budget film from South has beaten Akshay-Aamir's films at the box office this time. Though the figures are small,...