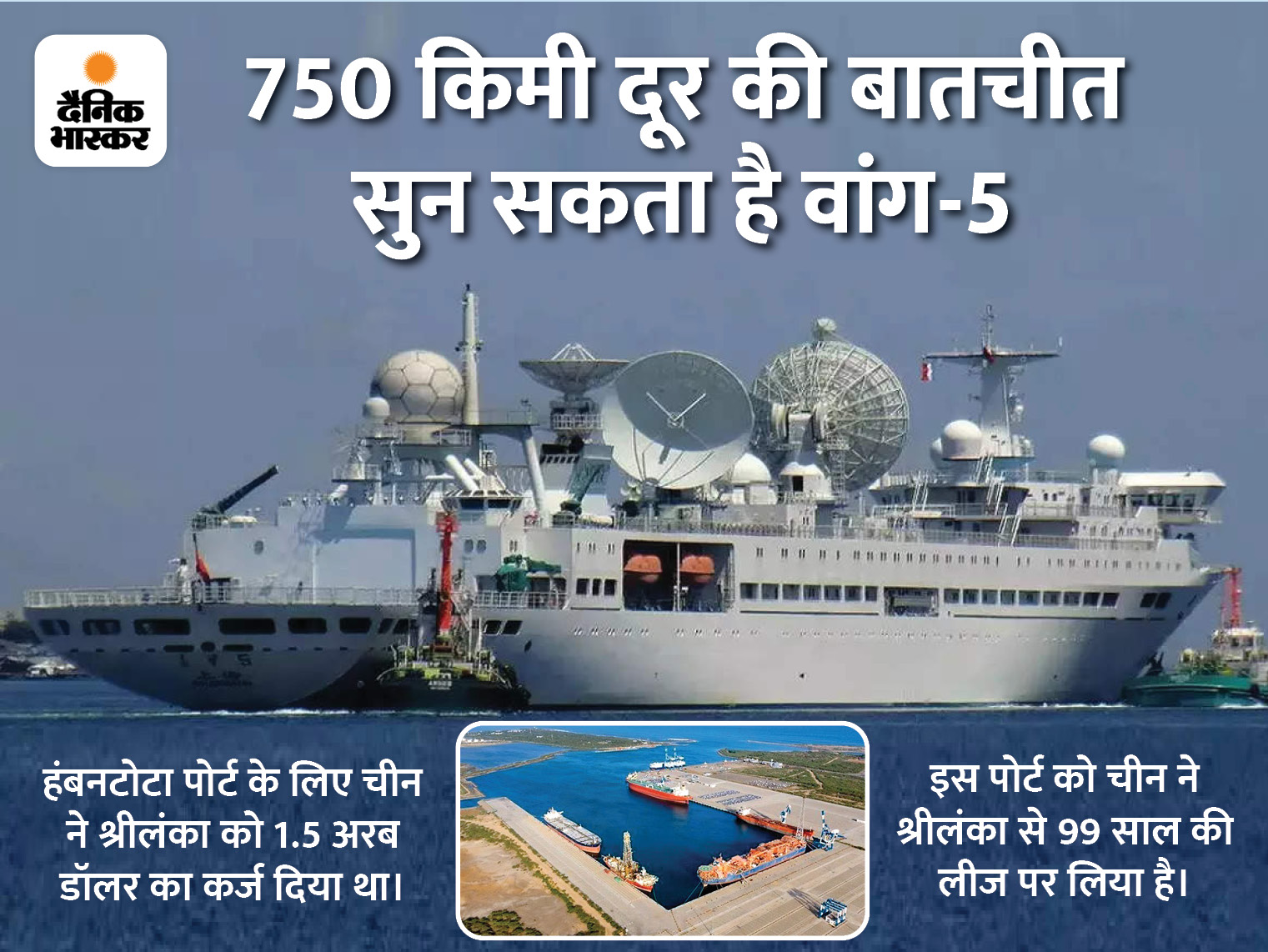 Due to India’s opposition, the Hambantota port of Sri Lanka could not come, China’s spy ship will now not only go there, but will camp there for the whole 6 days. The threat of spying by the Indian Navy and ISRO has increased from this ship named Yuan Wang-5.

This Chinese spy ship can easily monitor up to 750 km away. The distance from Hambantota Port to Kanyakumari in Tamil Nadu is about 451 km. In view of the threat of espionage, India had asked Sri Lanka not to allow this ship to enter Hambantota.

Approval to call ship from 16 to 22 August
Sri Lanka’s Port Master Nirmal P Silva says they have received the approval of the Ministry of External Affairs to call the ship to Hambantota from August 16 to 22. Sources related to the Ministry of External Affairs said that the government had given fresh permission for the visit, it was at a time when people in Sri Lanka were on the streets against the government. After which former President Gotabaya Rajapaksa fled the country.

According to the report of the US Department of Defense, this ship is operated by the Strategic Support Force (SSF) of the PLA. SSF is a theater command level organization. It assists the PLA in space, cyber, electronic, information, communication and psychological warfare missions.

Earlier, when China launched the Long March 5B rocket in 2022, it went out on a ship surveillance mission. Most recently it was also involved in maritime surveillance of the launch of the first lab module of China’s Tiangong space station.

India’s naval bases will come under China’s radar
Yuan Wang-5 is not a military but a powerful tracking ship. These ships start their movement when China or any other country is doing missile tests. This ship can easily monitor up to 750 kilometers away. This 400-crew ship is equipped with a parabolic tracking antenna and several sensors.

After reaching Hambantota Port, this ship will have access to major military and nuclear bases of South India like Kalpakkam, Kudankulam. Also, many ports of Kerala, Tamil Nadu and Andhra Pradesh will be on the radar of China. Some experts also say that China is sending this ship to Sri Lanka to spy on India’s main naval base and nuclear plants.

ISRO’s spying threat
The ship is fitted with hi-tech eavesdropping equipment. That is, standing at the port of Sri Lanka, it can gather information up to the interior of India. Also, Indian naval bases located on the east coast will be in the spying range of this ship. It is being claimed in some media reports that ISRO’s launching center in Chandipur can also be spied on. Not only this, it can steal all the information such as performance and range of missiles like Agni of the country.

On July 31, Foreign Ministry spokesperson Arindam Bagchi had said that we have received the news of this ship reaching Hambantota port in August. Keeping in view the security and economic interest of the country, the Government of India is keeping an eye on every development and will take all necessary steps to protect them.

Hambantota Port is on 99 year lease
The Chinese spy ship Yuan Wang-5 had departed from Jiangyin Port on July 13 and will soon arrive at Hambantota Port in Sri Lanka. In Hambantota it will be for a week. China has taken this port from Sri Lanka on a 99-year lease.

In the movie ‘Atrangi Re’, the mental condition associated with bad memories of the...